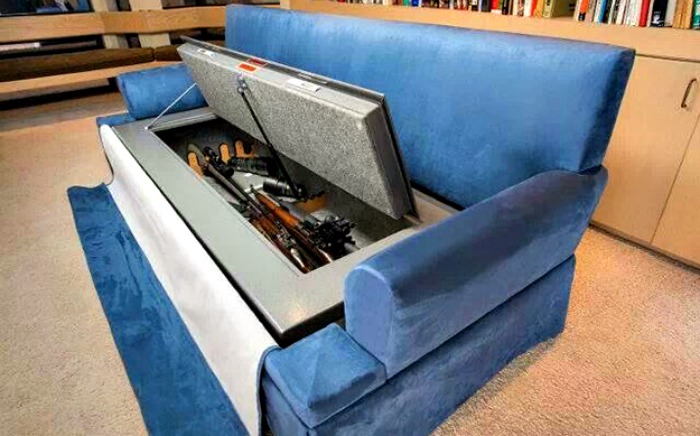 
So, here we go folks. In light of what’s going on in Washington right now, you need to start thinking about hanging on to your guns a little tighter. Government can be fickle on what stands it takes and there is no guarantee on gun policy standing on the side of citizens. What if they start limiting the number of firearms you can have? What if, say, as an American, you can only legally own two? Does that seem out there to you? Is that really beyond belief? Remember, folks, government is fickle and the tide turns in Washington fairly quickly. So, what do you do if it comes down to that? Of course, this is just a fictitious scenario we’re exploring here but … what are your options? Well, I know just what I would do.

This clock is both elegant and convenient.

This clock is both elegant and convenient.
You know, I have this beautiful clock on my mantle that is just a classic timepiece that looks great in my living room. It’s crafted of a dark, polished wood and has an elegantly curved shape to it but more than anything else, it’s just been really handy to have sitting there on my mantelpiece. I just look up when I’m sitting on my couch and immediately I know what time it is and it is only just a few steps from my couch. You see, this is important because it’s so close and handy that all I have to do is pull gently on its front panel and I have immediate access to my pistol. No one would even know it’s there. Love my mantle clock.

Keeping your guns in less obvious places is just as easy as that. You can get really creative when it comes to finding places to store them, as you can see by the photos. Personally, I love the idea of the couch. I mean just the thought of clueless guests sitting on an armory of weapons is humorous. The sheer practicality of it is unquestionable. First off, everyone has a couch, so “hiding in plain sight” is a no brainer, plus, a couch is the perfect size and shape for a hidden gun cabinet. Then, there is the fact that it’s a functional piece of furniture. Using a couch is sheer genius. 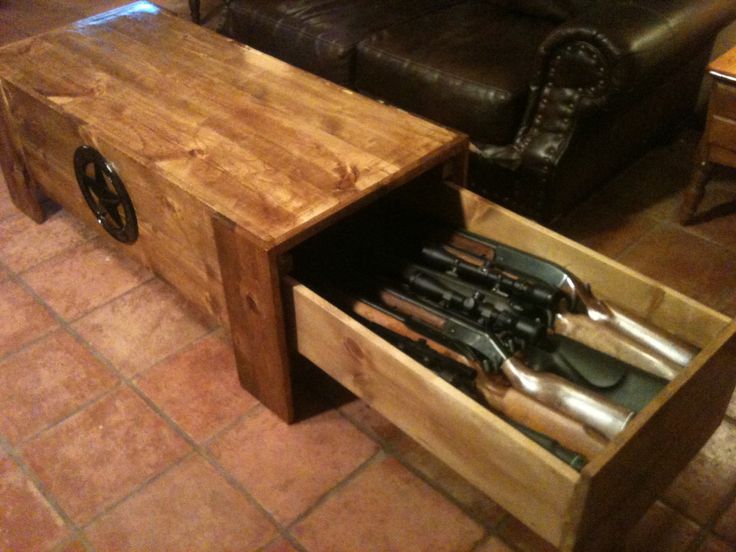 You can find these coffee tables online very easily.

You can find these coffee tables online very easily.
Keeping with the living room theme, you have to consider the compliment to any couch – the coffee table. It’s definitely not a new concept, either. I’ve seen dozens of coffee tables for sale on the internet that have been built out to secret away guns and ammo. Once again, folks, it’s all about “hiding in plain sight” and dual purpose. Also, it doesn’t hurt that they’re easily accessible. Like I said, you can find a dozen different styles and colors online that are for sale, so, really, it’s just a matter of picking the one that goes with the rest of your living room furniture.

Some other good options are compartments or spaces, which are hidden behind full-length mirrors and cubby holes that are hidden by hanging pictures or wall art. It will take a little more effort on your part because there is some construction involved to create the space in your wall but isn’t it completely worth it? Just in case. Of course, if you happen to have one of those really small pantries in your kitchen, you could always take the door off and replace it with something that looks less like a door. Use your imagination. Maybe, a simple shelving unit to hold cookbooks that you just swing aside to access the now hidden pantry.

Gun control policy may never get down to the extreme but, folks, you don’t want to live by would’ve, should’ve, could’ve. Do you? Be prepared!