Turn A Flare Gun Into A Real Gun

Sub-Caliber Devices are handy little items that will convert a 26.5mm flare gun into a Title I Firearm. Let me repeat: A 26.5mm flare gun – not the plastic flare gun that is most commonly used today as a signaling device. You can find the appropriate flare gun through military surplus companies and brokers but make sure that it is in excellent condition. (Look for the GECO, H&K, Polish, or Yugoslavian flare guns) It may take a little effort to get your hands on one but it’s completely worth it to have this multi-functional tool in your possession. The beauty of it is that you have one gun to shoot a variety of ammunition because all you have to do is switch out the inserts. With a sub-caliber device, you have the flexibility to use the best ammo for the situation without having to own more than one gun – whether you need a 38 Special or a 45 Long Colt. All you need to own are the sub-caliber devices for the ammunition you want to fire. I have found that this is definitely a more cost-effective option. 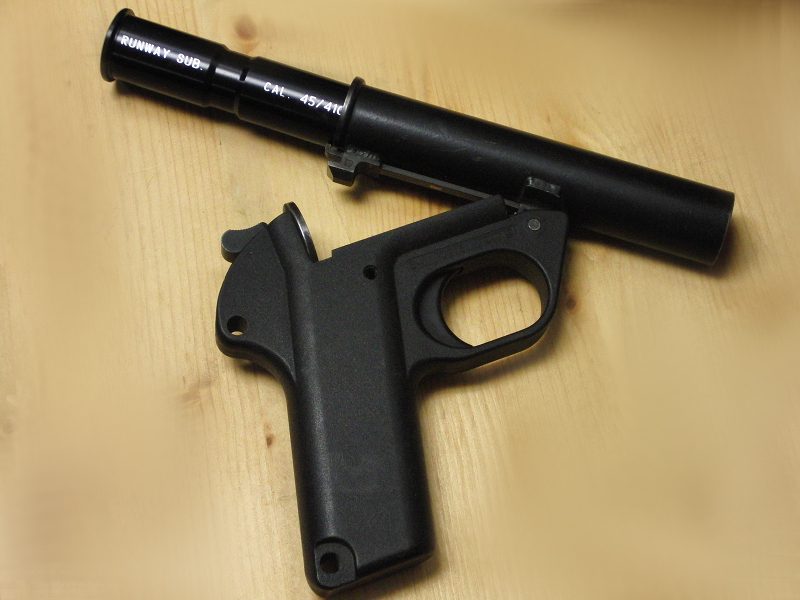 The sub-caliber device is used with a military surplus flare gun.

The sub-caliber is used with a military surplus flare gun.
Sub-caliber devices can be purchased to modify a 26.5mm flare gun to shoot .38, 45LC/.410 or .22LR ammo. So, basically, you have all the benefits of owning a gun without going through the motions of purchasing and owning a firearm, as the ATF has determined that the inserts are legal to use in a flare gun. However, I still suggest that you check out your own state and local laws just to be on the safe and legal side. (Federal, State and Local don’t always agree.) Of course, it’s illegal for felons to own a gun in any form. Remember, once you adapt your 26.5mm flare gun to fire ammo, it is a firearm and should be treated and considered as such. All Title I Firearm rules apply.
Just to make myself really clear, I do not advocate that a sub-caliber device be inserted into the barrel of a plastic flare gun. Obviously, it just can’t take the pressure of live ammunition. Now, folks, that’s a complete no-brainer right there but I’m reiterating it anyway.
Making the conversion to your flare gun is simple. Just insert the sub-cal device into the gun’s barrel and rotate the device to the best position for you. The barrel of the device is offset to allow the firing pin to engage the cartridge. Insert the appropriate ammo for the device that you’re using into the chamber of the sub-cal device and close the barrel of the flare gun. Make sure that the locking mechanism is secured. The weapon is now loaded and ready to fire. After it is fired, open the flare gun and remove the spent cartridge casing with your fingers or a knife blade, if necessary. It’s just that easy to use. For safety, the sub-caliber device should never be stored loaded. Load only when ready to fire. 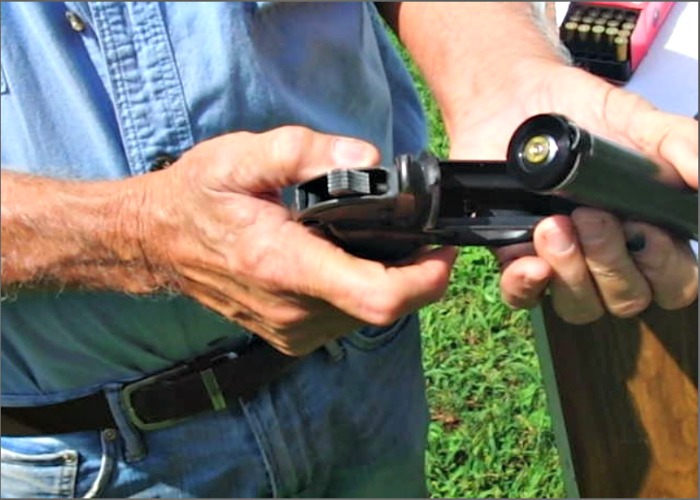 The sub-caliber device is easy to load.

The sub-caliber device is easy to load.
Adding a sub-caliber device and flare gun to your camping or survival gear gives you an extra measure of self-defense whether it’s against a two-footed attacker or four-footed attacker. (Unless, of course, it’s a bear and I recommend spraying him first with bear-repellent.) Another extra measure of security is that it can still be used as a signaling device after you run out of flares. It’s perfect to have on your boat in your emergency kit, since you need to have a flare gun onboard regardless. You just never know, out on the open ocean, when you made actually need a firearm. I can think of a dozen situations where you might need to have one. Can’t you? When you’re out in the wilderness, you can use your modified signal gun to shoot game just like any other gun. You can just drop this compact little device in your backpack or bug-out bag and know that you have a valuable tool in your possession. You now have the capability to take your signal gun and turn it, essentially, into a .22 or .410 shot gun, depending on which sub-cal device you have. You don’t actually have to lug an actual .22 or .410 shotgun around with you. Talk about convenience. 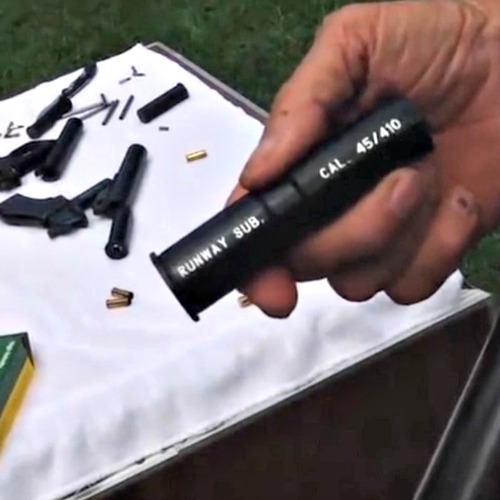 You can get a sub-caliber device for firing .45/410 ammunition.

You can get a sub-caliber device for firing .45/410 ammunition.
Runway Sub-Cal makes a variety of sub-caliber devices and has been a pioneer in the industry. The owner and founder, Wayne Daniel, has been manufacturing and selling firearms and accessories since 1973. He said that he had always been interested in sub-cal devices and sold and designed many of them over the years. His son, Buddie Daniel, began manufacturing and marketing the .22LR sub-cal insert for the 26.5mm flare guns. With his extensive knowledge, Wayne made the first 45/410 insert for his son’s company because no other manufacturer could rifle the barrel so that it would be legal under the BATF. Eventually, he took over his son’s company and Runway Subcal was born. He has even expanded into selling beam sights for the flare guns. Wayne told us that he believes that the success of his sub-caliber inserts is based, in part, on the fact that there are many folks out there who just don’t trust the government. They want to be able to have a firearm in their possession without getting involved with the government’s regulations. He also said that he thought that many people “just love to have the pistol shooting a 410 shot shell.”