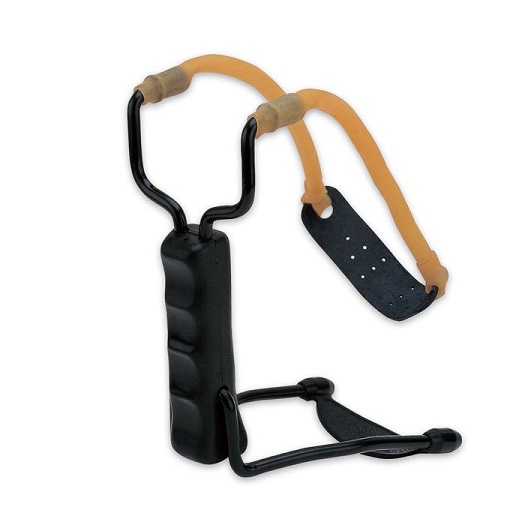 The Wrist Rocket has withstood the test of time.
By Adelia Ladson

A slingshot, if used properly, can be the ultimate survival weapon. It can be used for hunting, fishing, self-defense and, in a pinch, you never know when you might need the heavy-duty plastic tubing it has.

The slingshot, not to be confused with the sling, goes back to around the time that Charles Goodyear, invented vulcanized rubber, which was 1839. The slingshot was in full use by kids by 1860 and was usually make out of forked branches and rubber strips cut from inner tubes. They became mass produced products around 1918 but were still not popular until after World War II.

During the Forties, slingshots became serious with the production of a model that had a draw of about 45 pounds and had an arrow to boot. The National Slingshot Association was also formed at this time. The slingshot had finally come out of the age of juvenile delinquents to the age of professionals in their thirties, who used it for hunting and sport.

The Wrist-Rocket Company further advanced the slingshot in the middle of the Fifties with design improvements of the frame and the addition of the rubber tubing instead of the rubber strips.

The ammo that has been used over the years ranges from stones and musket balls to buckshot and air gun pellets. It just really depends what your target is! Experienced hunters can bring down game like quail and rabbits. If an arrow rest is added, well then, quarry a little larger can be brought down, too.

Adding an attachment to shoot arrows is not a new idea, either. A 1922 edition of Illustrated World has an article with a diagram about how to make a slingshot to specifically shoot arrows. The article admonishes the reader, “Like the bow it is a weapon and should be treated as such.”


An informative 1922 edition of Illustrated World.
An informative 1922 edition of Illustrated World.
As a self-defense weapon, a slingshot like a firearm, can be considered a concealed weapon in some areas. It can be effective in self-defense as a deterrent to an assailant, if using a less lethal ammunition. However, with the velocity that the ammo flies at, it can injure or maim a person. Of course, if you are shooting arrows, it automatically gets lethal status.

Pretty much the same concept is adopted for hunting as when used in self-defense – you are shooting at a live target. With practice, it can be effective in taking small game or larger, depending on whether you’re using buckshot or arrows. If you are proficient at shooting a slingshot in the traditional way, it will still take practice to learn to be adept at using one to fire arrows.

Another handy use for a slingshot is as a way to scatter your bait into the water over a wider area, when angling, so that you draw more fish.

If you take a slingshot apart, you basically have a forked frame and a length of rubber tubing. If you are out in the wilderness, there are instances when having heavy-duty rubber tubing might be extremely helpful. Using it as a tourniquet is the first thing that comes to mind. The tubing could also be used as a siphon, if needed. If you happen to be in a situation where you need to build a fire but only have a water bottle to use to focus the sun, you could use the frame of your slingshot to prop the bottle in position – instead of squatting down holding the bottle perfectly still until you feel like your arm is going to numb and you’re going to pass out. Never tried it before but it’s a thought and the neck of a water bottle will rest securely in the forked frame.

If you want to see an expert really work a slingshot, then take a look at the video below of David Canterbury, wilderness expert, putting one through its paces. By the way, the Marksman Pocket Hunter is his very own model.


Shop All Blowguns and Slingshots Here